Our Honourable chief guest delivered an eloquent and epigrammatic speech at the celebratory events of SPARRC s 12 th anniversary and the Inauguration of Indian Institute of Sports Medicine (IISM) which goes on to prove his deep appreciation of  Dr.Kannan Pugazhendi and Mrs.Sujatha Pugazhendi s achievements over the past 12 years. 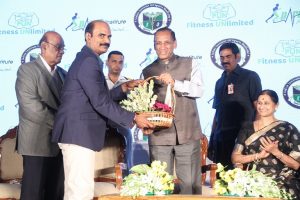 He shared with us his experience with Dr.Kannan Pugazhendi and was on target when he described the pleasing fashion in which he works, an adorable and honourable man who always puts his patients goals first ,works with zeal and brings happiness to everyone he encounters. He acclaimed that he has never met anyone who lives so true to their name as his name Kannan Pugazhendi describes his fame in the field of Sports Medicine.

He went the secret on to mention behind Doc s success being his wife Mrs.Sujatha Pugazhendi, while he applauded her originality, creativity , capacity to steer through difficult times, promote new ideas and managing the Administration entirely which is why she was recognised by a well deserved award for entrepreneurship. Thiru ESL Narasimhan stated that this lovely couple are a true testament of the Divine blessing and that Marriages are made in heaven. 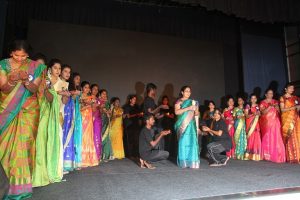 Having experienced Doc s magic touch, he claimed that the simplicity ,humility  and vast knowledge is the forte having made a mark in the health sector. He described Doc to be an extraordinary Doctor who uses just his touch – examination to heal people rather than prescribing medicines, X Ray’s, MRI. He was joyfully surprised when he found him to be a Doctor of hope,confidence and comfort who encourages his patients to be active and to do their job according to an extent they can handle. Instead of scaring people out of their wits Dr.Kannan Pugazhendi instils confidence, comfort and the assurance of a healthy life which goes on to be half the remedy people require , as quoted by the Honourable Governor.

Thiru ESL Narasimhan drew a comparison of SPARRC to a fire that spread across the country with its 13 centres and going international as well. He claimed it to be a fire that no fire service can put out as this fire helps millions of people. He announced that Dr.Kannan Pugazhendi and Mrs.Sujatha Pugazhendi will lead us into a future for a healthy humanity, like a banyan tree widespread and giving shade to many. 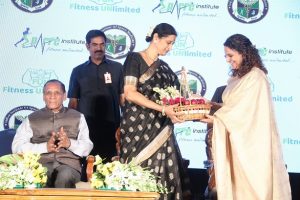 The Honourable Governor said that we should no longer go by WHO reports that Doc had shared in his speech earlier, rather by the year 2020, we will have SPARRC reports giving us statistics on various things.

Highlighting the Inauguration of Indian Institute of Sports Medicine ,he spoke of the marvelous 12 year journey entering it’s teens while wishing an endless journey for us.IISM as an educational institution will excel in creating more Dr.Kannan s who will spread his healing touch. He drew yet another comparison saying Dr.Kannan Pugazhendi s fingers are the X Ray machine, his words are the scans and the comfort he gives is the eternal medicine to be remembered for a long healthy life.

He shared his wishes for Doc and Sujatha in the interest of many who can benefit out of their growth. On a happy yet witty note he brought his speech to a close stating he will remain a well wisher and is privileged to be part of this SPARRC family for whom he hopes family planning never applies.

This site uses Akismet to reduce spam. Learn how your comment data is processed.